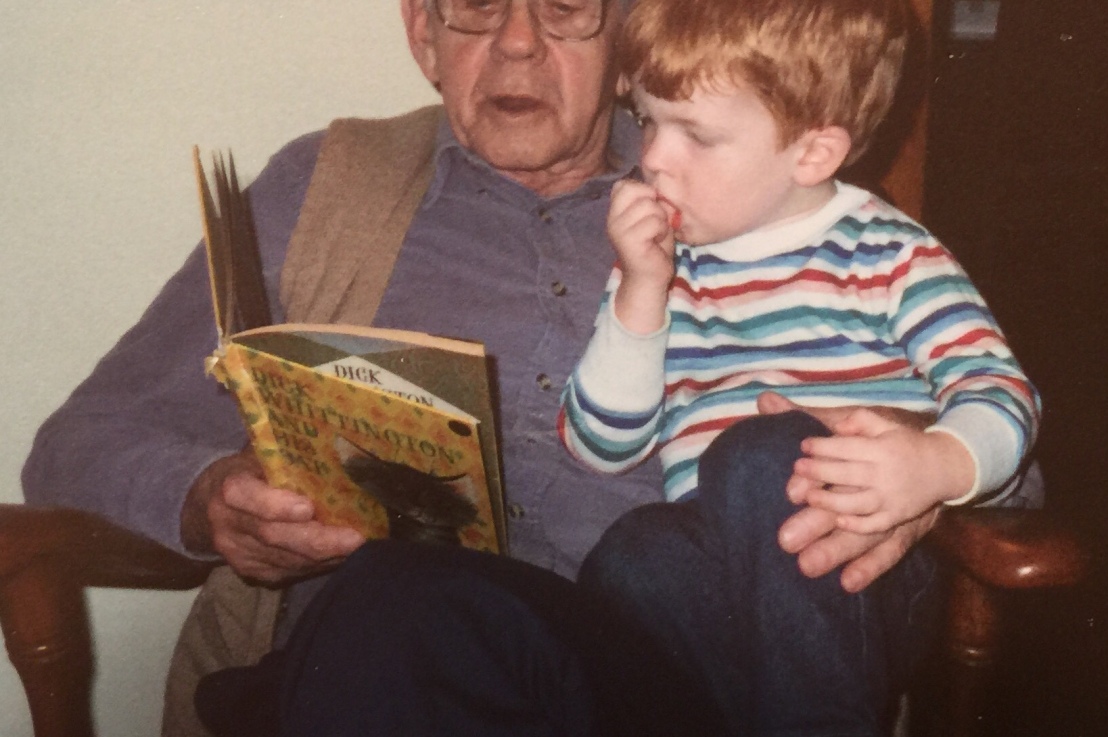 Fourteen years ago today (June 30, 2003), Willard E. Hemphill, my grandfather, breathed his last. I wanted to take some time to remember Grandpa. Much of what follows has been gleaned from some written memoirs of Grandpa that I recently discovered while visiting Grandma in Pittsburgh a while back.

Grandpa’s father, Willis R. Hemphill, was a farmer, cattle-breeder, and barn builder. According to Grandpa, even though Willis Hemphill had not completed high school, he was “a master craftsman…as a self-taught draftsman he had few peers.” While Great Grandpa Hemphill was apparently an incredible builder, he struggled financially. Grandpa recalled his Uncle Charlie remarking about Willis’ barn building business: “he built too good, and he charged too poor.” Most of what Grandpa knew of his father was from other’s recollections. Great Grandpa Hemphill died Christmas Eve, 1919, when grandpa was just four-years old.

Great Grandma Hemphill, Margaret Qua Hemphill, was widowed at the young age of thirty-four, with six children, all under the age of eight. She must have been an extraordinary women. Five years after being widowed (I do not know how she sustained her family during that time), she was elected as librarian of the new public library in Belle Center, Ohio. Grandpa graduated from high-school in 1933. The next year, he headed to Beaver Falls, Pennsylvania; hoping to attend Geneva College (my alma mater as well).

Grandpa did not graduate from Geneva College until ten years after his high-school graduation. This delay was primarily due to the fact that Grandpa had to work his way through college. During those ten years, Grandpa worked several jobs, including (but not limited to) working for J.C. Penney Company (stock-boy and assembler of Christmas toys, later a full-time salesman, and eventually a department manager), constructing two houses (almost single-handed), and various roles at the Babcock & Wilcox Mill (from “grease-monkey” to “stainless-steel expediter”).

It was during his time at Geneva that Grandpa met Jean Linton, my Grandma. To describe the encounter in his own words, “in the Fall of 1939, at the Geneva RP Church, my brother Ray introduced me to the most attractive co-ed I have ever met. She was a freshman from Denison, Kansas, named Jean – and my life has never been the same since.” Grandpa eventually asked Jean’s parents for her hand in marriage – which was done by letter – to which they consented (Grandma did as well). Grandpa did not meet his in-laws (they had never heard his voice or seen his face) “until that day when our car pulled into the barnyard of the Linton farm…for the [wedding] ceremony.” When Grandpa informed his mother that he and Grandma were getting married before finishing college, she exclaimed, “Oh Willard, you will never finish college!” Two years later, Grandpa and Grandma made headlines in the local newspaper as the first married couple ever to graduate together from Geneva College. 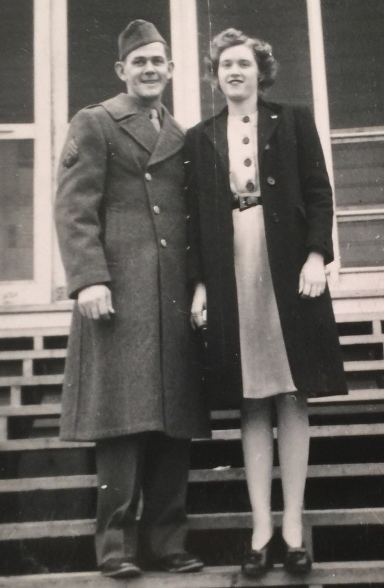 and as you can imagine, he was promptly inducted into the US Army the following day. About a year later, Grandpa waded ashore on Utah Beach in Normandy, France a day after D-Day (or “D-day-Plus-One” as Grandpa put it). During his time in the army, Grandpa participated in several campaigns (earning five bronze battle stars), including Normandy, Northern France, The Rhineland, The Ardennes, and Central Europe. Much could be said about Grandpa’s service in Europe during World War II, but I’ve always appreciated the following story, which I’ll let Grandpa describe in his own words.

“Guided tours of Windsor Castle were cancelled for the duration, but one day I got a personal tour of the place. A small girl was plucking at my buttons and uniform decorations, in a tea room beside the Castle, to the consternation of her mother. As a result of the ensuing apology by the mother, I learned that the child’s grandfather was a castle gardener (they called them groundsmen) and that he got off work at 4 o’clock. An appointment was arranged at the Main Gate. After lunch, I wandered around to locate the Main Gate. Walking down a paved path along a tall cyclone fence, running from the castle, I saw three horses and riders emerge from a small archway in the wall and head in my direction. A half dozen English strollers suddenly began calling excitedly, ‘Oh, it’s the princesses!’ Sure enough, Elizabeth and Margaret, and a groom, came riding past (within 30 feet) waving cheerfully as they passed.

“My benefactor was waiting when I got back to the Main Gate shortly before four o’clock. Her ‘Papa’ emerged with other Castle employees promptly at 4:00. He allowed as how – since His Highness must be in London, since his flag was not flying from the Gate-tower, as it always does if he is in ‘residence’ – we might be able to have a quick go-around of the premises.

“We three emerged from one of the Castle churches and leaned against a low iron gate between a round tower and an adjacent building. The gate opened upon the main courtyard of the Castle. ‘Papa’ was explaining that there was the Queen Mother’s apartment, and over here the residence of the princesses, over there the Great Hall, etc. – when a trumpet sounded. ‘He must be back,’ cried the groundsmen, excitedly, as a flag rose on the Gate-tower, and the Main Gate swung wide, to admit a long, black limousine. It came around the driveway within arm’s reach of where we were standing. There sat the King and Queen of England, in the back seat. As we met eye-ball to eye-ball, King George the 6th raised his right arm in a sharp salute. I returned the courtesy. I think he was more surprised than I. ‘Papa’ said fearfully, ‘I think we best go.’ We did. Preposterous? Yes, but true!!”

After returning home from the war, Grandpa began his decades-long career as a junior high industrial arts teacher, eventually retiring in 1977. Grandpa spent his whole life after the war in Beaver Falls, Pennsylvania; raising three boys (Bill, Bob, and Jim) with Grandma. Grandpa spent his summers painting and perhaps constructing a house or two. Like his father, he was exceptionally skilled with his hands. Grandpa also had an exceptional mind, able to recite as an adult significant portions of poems and speeches he had memorized in grade school. Grandpa was a deep thinker, and while he never served as an Elder in his church (he served as a Deacon for many years), he was greatly concerned with theology and the Reformed Presbyterian Church’s stance on various issues of the day. Grandpa’s poor health eventually ended his ability to work with his hands; though his mind remained sharp, only declining in the final few years of his life.

I grew up in Alabama and Colorado, while Grandpa lived in Pennsylvania, so all of my memories involve summer or Christmas visits. Three distinct memories come to mind as I reflect on Grandpa.

First, Grandpa suffered with emphysema, but that just seemed normal to me. That was just how things were. I recall pretending his various inhalers were pistols as I played cops and robbers around their house. I remember the weekly visits from the Oxygen truck to fill up Grandpa’s tank, which was always an exciting process to watch. I remember hearing the instructions to take care as I walked through the house, not to step on or trip over the oxygen tube. I remember seeing Grandpa, visit by visit, decline in his health. Eventually he couldn’t even walk to their church, which was just one block away. I remember him calling out “Jean…Jean…Jean.” in a panic, when he struggled to catch his breath. Watching Grandpa’s health deteriorate over the years was my first experience of witnessing what disease can do to a human life. It was not hard to witness at the time, but it is hard to reflect on now.

Second, as I mentioned before, Grandpa was an incredible craftsman. This included his creation of a wide variety of interesting puzzles and toys. These home-made puzzles and toys were an absolute delight for me as a visiting grandkid. I would spend hours upon hours trying to figure out his un-orthodox puzzles or building castles with his wood blocks. Grandpa enjoyed watching me work through the puzzles. He typically would not teach me how to solve them, until I had spent a significant amount of time on my own trying to figure it out.

Third, I can recall the many times sitting on Grandpa’s lap or sitting next to Grandpa 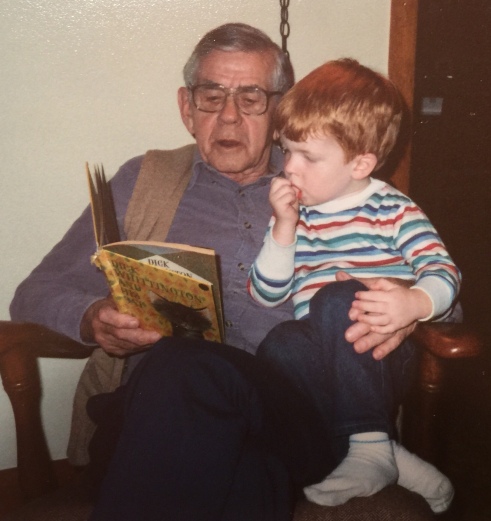 as he read to me, or as we sat in the den, watching Bob Ross paint a landscape on PBS. Grandpa was a talented painter, and while he rarely painted when I was around, many of his paintings hung in their house. At times, I think I was more interested in getting down and playing outside, but how thankful I am now for those opportunities to just sit with Grandpa. How I long for those times now.

There is much else that could be said about Grandpa. Like many of his generation, he led a life that is utterly fascinating to me now. The variety of experiences he had and the tremendous talents he possessed are amazing. And yet, for the most part, he led a pretty quiet life. His love for his Savior and Lord defined his life, and came out in how he loved his wife, his boys, his grandchildren, his church, and his community. I love my Grandpa, and I look forward to seeing him again.